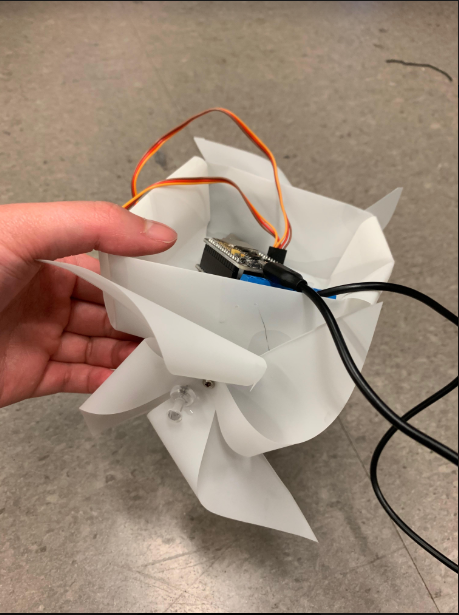 Boat 1: Our goal is to create a printable robotic boat for early education. We decided on a paddleboat as the most straightforward model. We wanted to get an idea of how the boat would be constructed with a simple mechanically propelled paddlewheel, so our first prototype used twisted rubber bands to propel the boat.

Boat 2: In our second prototype, we adjusted Boat 1 to integrate electronics to motorize the boat. We also placed one paddlewheel on each side for stability and also so that in the future, the boat could be steered by adjusting the speed of each wheel. After testing the boat in water, we realized that the paddle wheels we initially made from popsicle sticks were too small to actually propel the boat forward since the maximum rotation speed of the servos was slower than we anticipated. We also confirmed that servos could be used underwater safely.

Boat 3: Our most recent prototype was our first attempt at making the boat out of plastic film, with the end goal of designing the final structure on RoCo. We folded a box for the body of the boat, where the electronics were placed, and two pinwheels, which were attached to servos on the bottom on the boat. We also improved our paddle wheels to be more efficient at moving the boat. This prototype was the most successful at constant forward motion. Our next step will be to modify the chassis to securely house the electronics and keep them dry.