Boat 7 was created using a template that we made based on the structure of Boat 6. Our goal with this boat was to get an idea of the template we would use in RoCo. We also made new paddle wheels using hexagons instead of circles to simplify construction. Boat 7 was faster and went straighter than Boat 6. 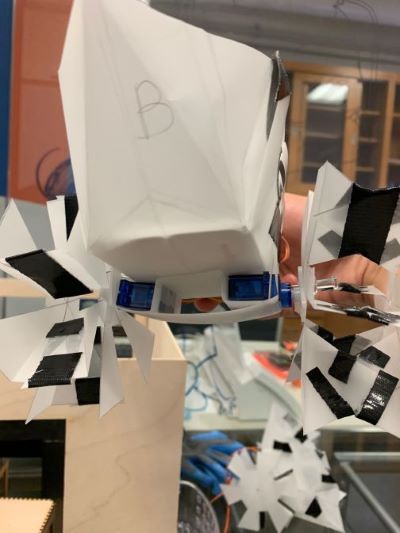 With Boat 8, our goal was to test a method of attaching the servos to the boat without the use of tape. As shown in the picture, the servos were held up using two strips of plastic which would be attached to the boat structure. One strip held the servos in place while the other held them against the bottom of the boat. We also tested a different method of creating the paddle wheels that involved less cutting and improved the boat chassis slightly.

For Boat 9 we wanted to simplify the structure and template of Boat 8 so that it would be easier to construct and implement in RoCo. We also further improved the paddle wheels by adding spokes and making them out of octagons. In addition, we used a different method of cutting the templates that allowed for more surface area of the paddles. Our next goal is to implement our templates in RoCo.