After setting up the crazyflie as a blimp and performing various tests, one primary issue was noticed when attempting to control the blimp. This issue was in the yaw control; I noticed that for large yaw inputs, the blimp would not turn left or right. Instead, the left and right motors would alternate between on and off, with either just the left or just the right motor on at a time. The rate of alternation was initially proportional to the yaw input, but would slowly increase over time.

After investigating the way this yaw input is processed, I found a few things:

Removing Integral Control: Considering all of this, I decided to remove integral control from the crazyflie by setting all k_i (integral gains) to zero. To do this, I modified the crazyflie firmare in the 'pid.h' file (the process for modifying firmware is discussed in my previous blog post). The modifications can be seen in the image below (commented values are the original gains). 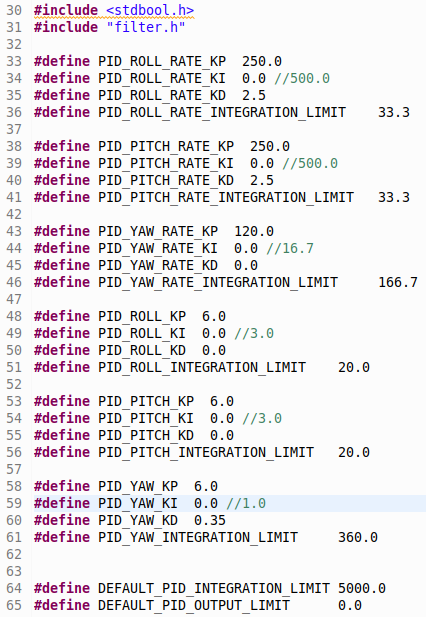 Fixing Alternation Issue: To fix this, a more direct approach can be implemented for controlling yaw rate, which is to directly feed the user input into the yaw rate controller (circumventing the yaw position controller). This will avoid the angle rollover issue. To do this, I modified the 'controller_pid.c' file as shown in the picture below (the commented code is the original function call).

I tested the updated firmware on my blimp setup and did not notice any alternation, even for large yaw rate inputs or over long periods of time.